I've sewn the 16 Rattlesnake blocks together so the design wall is now housing my Serpentine Curves blocks - I want to look at them for a bit, and make some more before I decide how I want to set them.
Also I've added to the crosses... 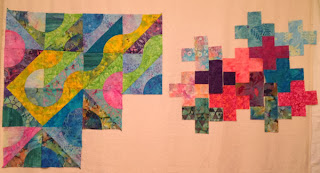 Posted by Heather Hasthorpe at 13:54 No comments:

Old Quilts and their Stories

The Quilters Guild had an Area Day in Swaffham Prior and Pat Lowe came from the Traditional group to share her passion for old quilts. 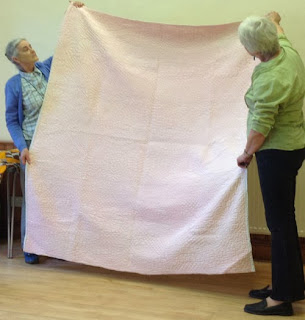 This is probably a North Country quilt as the quilting travels across in lines. Difficult to photograph, the stitching made beautiful patterns across the surface, with large roundels and cross-hatching. It's an English quilt as the edges are turned in towards each other and stitched together with the quilting stitch. 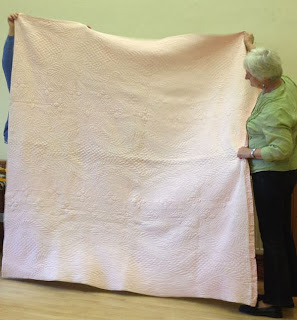 This is the back of the pink floral quilt below which Pat and a friend bought for £35 between them, the other share of which was then given to Pat as a hostess gift! The edge on the right has been bound much later to cover up wear, but is all part of the quilt's history. It was bought in Yorkshire, and at an exhibition there some time later, Pat and her friend saw its twin, unfortunately complete with rust marks from having been placed on top of the bed-springs to prevent wear on the mattress! The owner did not want to sell, and Pat did not want to part with hers, so they remain parted.

This is a Welsh quilt and belonged to a friend. Pat took it to a Guild day to try to find out more about it and discovered how much it was worth. Her friend was willing to sell but Pat had little cash so she paid for it over time. When she got it half paid she was allowed to take it home but continued to pay off small amounts till it was fully hers!
The fabric on the front of the quilt is red and is the same design in a different colourway to the reverse. The quilting is clearly Welsh in design and has a large leaf pattern repeated 4 times and beautiful double cross hatching across the centre.
Afterwards we were treated to the Traditional group Suitcase collection of small quilts on the theme of "Building Blocks" which provoked a lively discussion on what makes a traditional quilt as a few of them seemed quite contemporary to some of us.
My favourite was a clever little quilt of nine blocks where the central blocks were made from the two blocks on either side combined. A great idea and very well executed.
It's a good idea to get together with other groups in the area and hire the suitcase for a quilt group session as this spreads the cost.
Posted by Heather Hasthorpe at 07:57 1 comment: 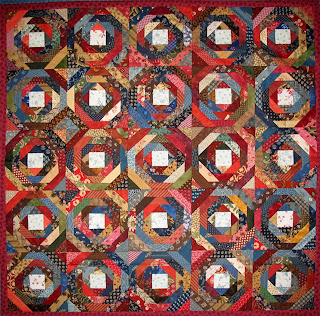 Here is my Dark Pineapple quilt made with scraps following Gyleen Fitzgerald's instructions in her book Trash to Treasure.
Gyleen is going to link her Facebook page for these quilts to here.
She is currently producing a new book using diamond shapes.

Posted by Heather Hasthorpe at 03:39 No comments: 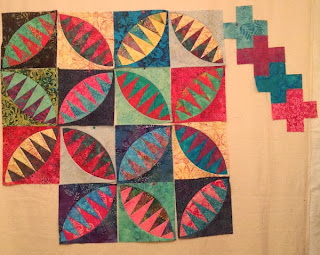 I think one more block will be enough for a class sample, but I may decide I like it enough to make it bigger... 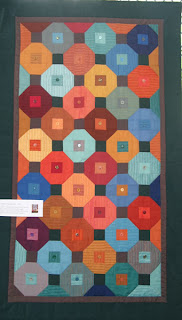 I am thinking that I would like to use the other halves of the Jelly roll strips to make a crosses quilt. It is one of those designs that relies on a design wall to lay out the pieces and then you sew together in rows. I made a quilt like this once before in Oakshott cottons that was called the Donut Quilt. I think the pattern is called Kansas Dugout!

Posted by Heather Hasthorpe at 15:42 No comments: 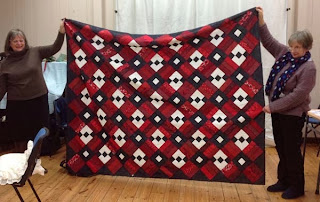 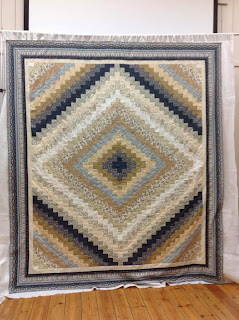 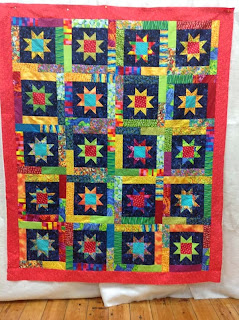 Pat's quilt for a grandchild. I like the floating stars, 3 1/2 squares dark and 2 1/2 squares brights so the points overlap. 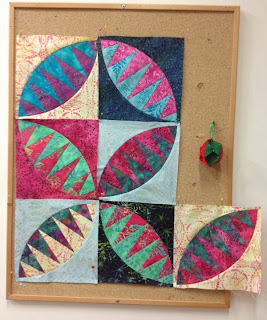 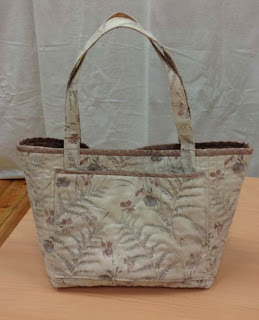 Another finish, Carries birthday bag!
Posted by Helen Howes at 02:53 No comments: 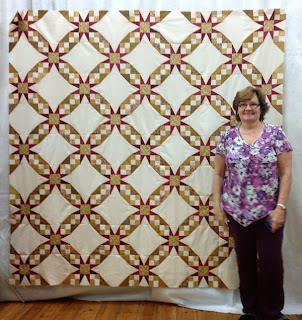 Julie with her creation.. Busy bunnies.. 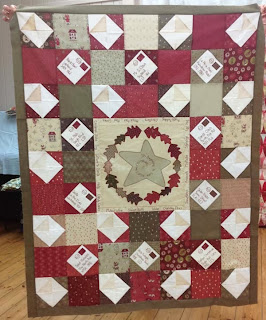 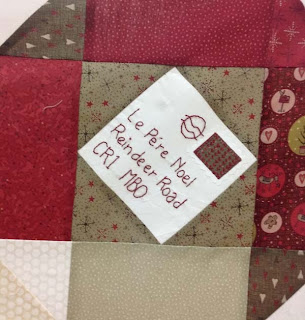 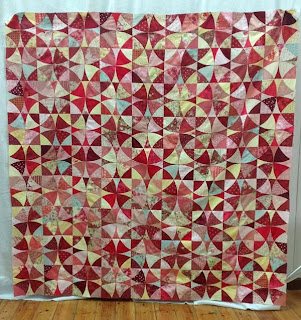 Got it together!! My Winding Ways can now go off to be quilted by the incomparable Mandy Parks of the Quilts Whiskers!
Posted by Helen Howes at 07:43 No comments: 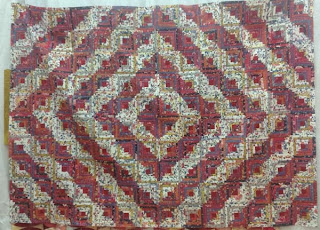 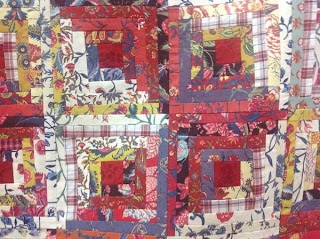 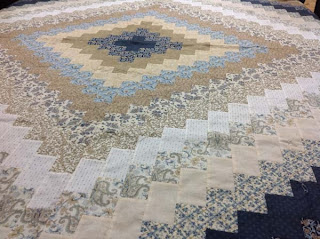 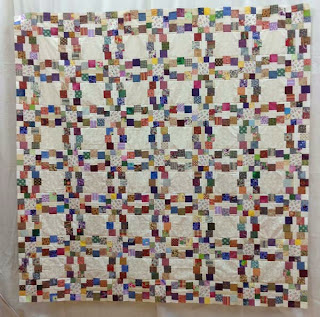 and Julie's Pixelated Wedding Ring - she was up till 1 am doing this!
Posted by Helen Howes at 13:59 No comments:

I'm away from home on quilt retreat, at Belsey Bridge. There is so much home cooked food I couldn't face supper and just ate half a banana!
I have made great progress with the Winding Ways quilt and now have half of it sewn together. 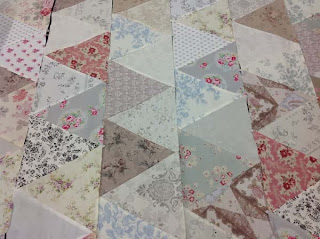 This started life as bunting at a wedding, and is now going to be a quilt for the lucky couple!
Posted by Heather Hasthorpe at 11:42 No comments: 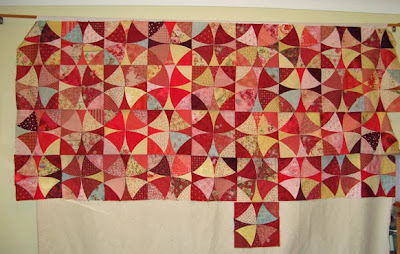 The top two rows are completely joined now and the third row joined to itself. Subsequent blocks are placed to check fabric variety, but also I am trying to make sure that the lovely pale blue accents are scattered across the quilt surface. I am looking too at the value, checking that I am including blocks where the darks are sometimes medium, and the same with the lights. In fact the same fabric in some instances is placed both as a dark and then as a light in different blocks. This is how you get movement in the design, so that the large dark circles pop out as you look at the quilt and then the large light circles appear as your eye moves over the surface. So lots of considerations but an enjoyable process.
I am surprised by how dark it is overall ...

Posted by Heather Hasthorpe at 06:07 No comments: 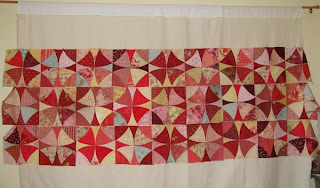 Hooray hooray! I have got my temporary design wall installed so I can work on my Winding Ways blocks. Each block has 12 different fabrics in and I need to lay them out so I can check that adjacent blocks do not have the same fabric in them. I probably won't entirely manage this but it's the aim!
My husband put a couple of curtain pole brackets up and a length of copper pipe (the curtain pole was not strong enough) and I put up a length of brushed heavyweight cotton bump. The blocks stick to it but need a pin or two when they've been joined together. The whole thing can come down quickly and easily.
Now to get some more pieced..

Posted by Heather Hasthorpe at 07:20 No comments: 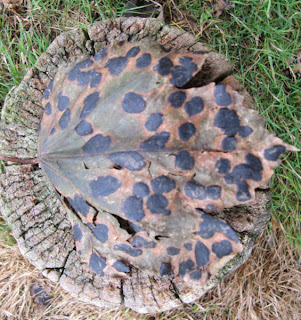 I saw this amazing spotty leaf at Felbrigg when I went on my Fungi hunt. I suppose it has some kind of virus, I don't remember seeing anything like this before!

And here are some more pattern pictures from the East Ruston Vicarage Garden - it's a treasure-trove of design ideas.

The garden is designed so that there are lots of viewpoints to catch the eye. There are holes in some of the hedges so you can catch a glimpse of Happisburgh lighthouse.
Grandchildren gone home now so back to the sewing machine!
Posted by Heather Hasthorpe at 05:18 No comments:

The grandchildren are here and carved pumpkins last night. They are definitely more scary with the lights out!

Hearts are the theme for next year's FOQ Tombola and here's some I made earlier which I've posted off to Jan Allston in Region 2.

Posted by Heather Hasthorpe at 02:38 No comments: