I went to visit the East Ruston Vicarage Garden. Quite famous locally as the owner, Alan Gray does a radio show each week. There is always a lot to see in the garden, which is huge, and I found lots to capture with my camera... I was looking for textures and pattern and there are some great examples. Couldn't resist the lovely old car though! I wonder who was visiting?


Posted by Heather Hasthorpe at 04:59 No comments:

Here is a picture of my piece for the Contemporary Group Suitcase collection. The theme is "All in a Day's Work". This is what I wrote about it to go with my submission: 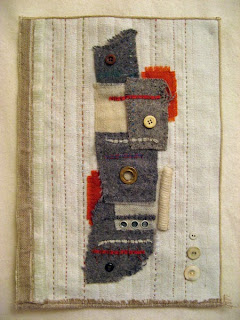 I made my piece to reference the daily efforts of women including myself to use woven textiles and stitch in their homes to provide a warm and safe environment for their family.

Woollen blanket scraps, some mended, backed with linen and stitched with old linen and silk threads as well as cottons. One piece of old grey blanket bears the eyelet as witness to its wartime use as a door curtain. There are buttons from my grandmother’s button box and these include a uniform fly button and liberty bodice buttons. I have added scraps of hand dyed blanket and coloured cotton.

I don't hold out too much hope of it being accepted, I've not had anything accepted yet... still nothing ventured nothing gained! It'll be in the post tomorrow morning.

Norfolk has the greatest number of preserved Mediaeval churches in the world. St Peter's at Repps with Bastwick is one of our local small churches with an octagonal tower, and was having a costume exhibition as a fundraiser. Some were made by a local lady who makes costume for the theatre and some were genuine old garments that had been preserved by local people.
There was a beautiful pink Ball Gown from the 1980s by designer Sandra de Ville:

And I did a double take at the RAF uniform as from the back I almost thought it was my Dad!
As a small child I called him "My Daddy who lives on a train" as we were always meeting him or waving him off... however from the front it was too androgynous a face, and no moustache. The fabric though felt so familiar, rough woolen cloth, must have been uncomfortable to wear in warm weather!

There was also a wonderful Victorian Day Gown in Pattered Silk worn by Caroline Mary Watson at Shropham Vicarage in Norfolk, lent by her descendant Caroline Watson. The detail shows the amazing amount of embellishment, lace and frills galore!

The Church had interesting Victorian stained glass and you can see the crossed Keys in the chancel window, St Peter's sign. Wall paintings too.


Posted by Heather Hasthorpe at 09:07 No comments:

These may be less useful for the Journal quilt designs that I have in mind but they are very interesting shapes and colours. These too were found at Felbrigg. 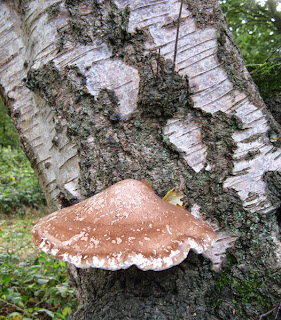 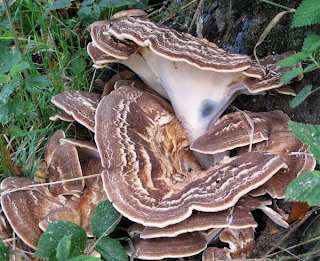 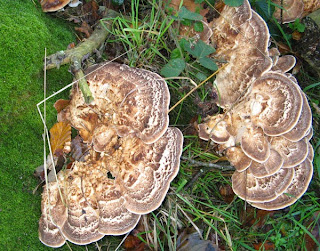 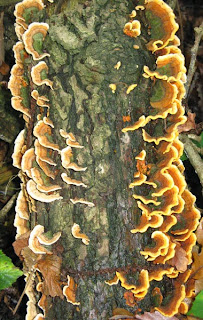 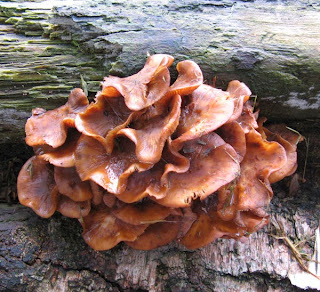 Some were on living wood, some on dead and fallen trees or tree stumps. I loved the way the light caught the edges of the yellow one and made it glow!

Posted by Heather Hasthorpe at 03:30 No comments:

I went for a walk in the ancient woods at Felbrigg, a local National Trust stately home. There were some beautiful fungi there including one I'd hoped to see but didn't really expect to: the Faerie toadstool Fly Agaric: 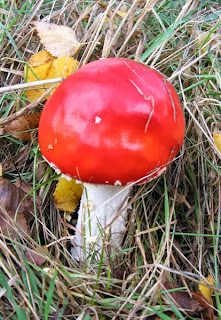 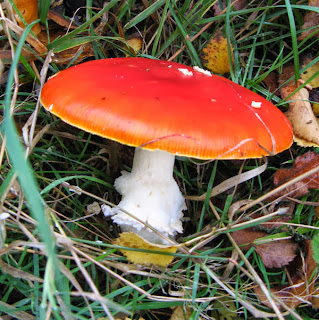 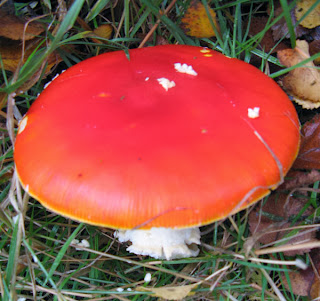 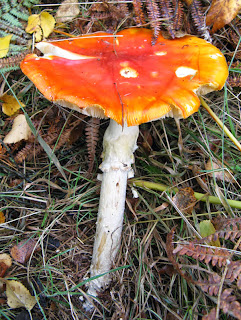 Such a rich colour!
lovely stripey bracket fungus too..

Posted by Heather Hasthorpe at 05:15 No comments:

I've been making  little purse over the past few days, as a birthday gift. Mostly machined, because hand stitch takes me so long now and I end up with sore wrists...
but I enjoyed making these little button flowers. 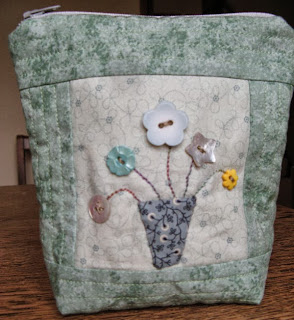 Posted by Heather Hasthorpe at 07:10 No comments:

I've been collecting pictures of Fungi over the past month or so as I think they will be a good design source for my remaining Journal quilts. They are difficult to identify although I have borrowed a book with excellent photos... 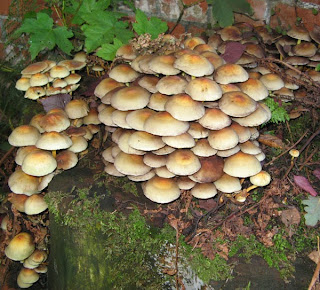 They like a shady damp corner and rotting wood.
Posted by Heather Hasthorpe at 08:44 No comments: 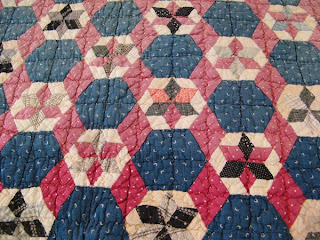 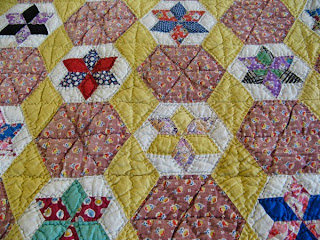 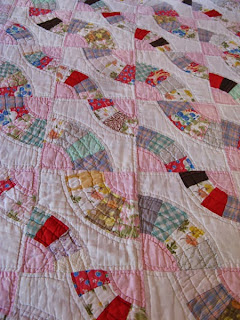 Two very nicely made diamond star quilts from the exhibition in Fakenham, and this interesting Snails Trail with curving paths in different widths. Scrap segments joined to an asymmetric centre with pink quadrants to complete the block. Although the meandering curved sections do not match up at all well, and certainly lack the precision of the two above, they still make a quilt that someone was proud of and enjoyed.
I have also been to the excellent exhibition "Frayed - Textiles from the Edge" at Great Yarmouth and the current exhibition at the Sainsbury Centre in Norwich.

We had an excellent Quilters Guild area day yesterday and made a phenomenal profit of over £300. Pictures and reports on Helen's blog here:

Hard work though so resting up today..


Posted by Heather Hasthorpe at 06:52 No comments:

The bird is by Jackie Norris and the star is mine; we are making these in Helen's workshop tomorrow, with Jackie taking charge. Good fun!

Posted by Heather Hasthorpe at 08:45 No comments: 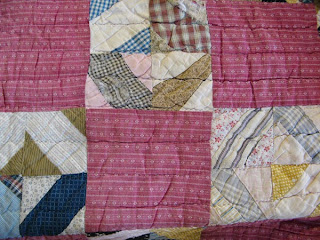 The Burgundy quilt was interesting. The four-patch squares were pieced randomly from scraps and set with burgundy dress fabric, then rather crudely quilted in straight lines. There are rusty marks on the back showing that it was placed on the bed-springs under a mattress for some time. 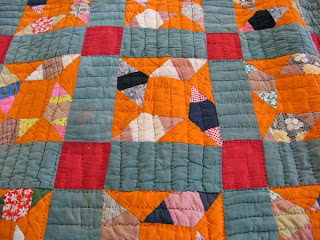 This unusual design is pieced with scrappy parallelograms and orange triangles around an orange square. There are turquoise sashings and pink post squares which make it quite bright! The patchwork pieces and settings do not all fit together very well and it was probably a collaborative effort. 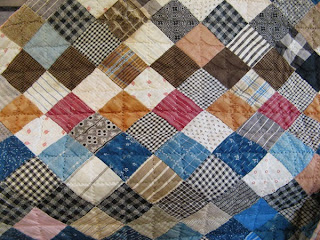 This design of a one patch set on point makes a pattern of concentric squares by the placement of colour, but you can see in this picture that it is not consistent: the blue squares are of similar fabrics and the browns have odd pieces that are similar. However the red and ochre squares are set alternately and are similar enough to read as a line of colour. 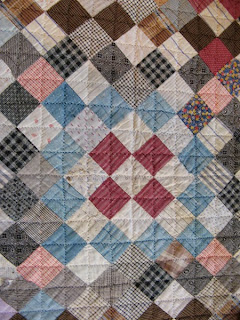 Posted by Heather Hasthorpe at 11:37 No comments:

More of the interesting old quilts. 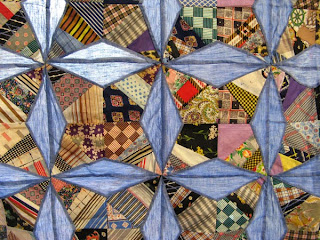 These scrappy kites were pieced over papers and the blue fabrics added to make square blocks. You can see the light shining through because this is an unfinished quilt, it is just a top, but was hung so that you could walk around and see the paper foundations on the back.

Here you can see the newspaper foundations!

Below is a finished quilt made in a similar way with small scraps of fabric pieced together to make the kite shapes. These are set into blue background triangles and the blocks then sashed with a rather garish and modern looking print. You can see the hand quilted curves of the Baptist's fan pattern. 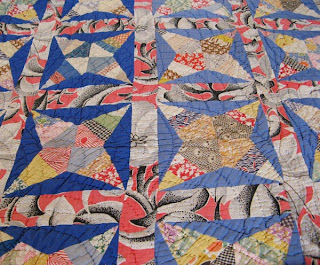 Quilts from the Meador, Williams, Heath Quilt Collection made by one extended family in the USA exhibited at the beginning of October in Fakenham Parish Church.
Posted by Heather Hasthorpe at 13:00 No comments: 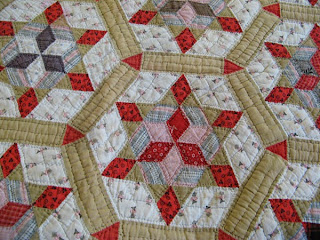 I went to Fakenham to view the exhibition of American Quilts made and used by an extended family in Tennessee and Kentucky.
This quilt was hand pieced and hand quilted and is backed with feed-sack fabric.
Many of the quilts were not in such good condition as they were made during hard times and with poor quality fabrics, but they were very interesting. 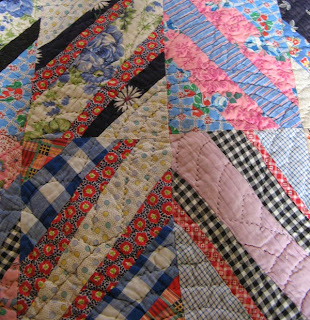 Several shared a similar design where scraps, some of them quite small, were pieced together, cut into squares and rectangles and then joined up to make the patchwork top.

These two examples show the kind of fabrics used, utilitarian, clothing, dresses, shirting and feed-sack fabrics. They are hand quilted with an all over Baptist's Fan pattern. 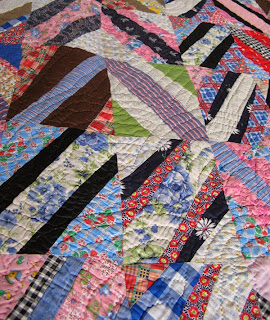 Below is a later quilt made in the 1950's in a strippy style where pieces of random patchwork are assembled into bricks and set into strips of floral fabric. The owner of the quilts recalls that the fabric featuring cowboys and a gun-belt with bullets was from his pyjamas! I've put it in upside down.. 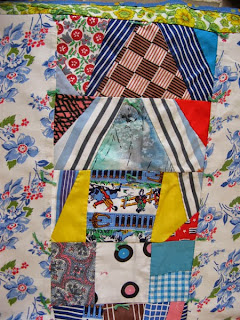 The quilt tops made from Feed-sack fabrics which were loosely woven cottons, have worn through in places, some showing that the tops were quilted onto an earlier worn quilt.

You can see how much the later fabrics have faded as the earlier dyes seem to have lasted better.


More all-over Baptist's Fan quilting which seems to be good for holding scrappy tops together.


more pictures in my next post..
Posted by Heather Hasthorpe at 09:07 No comments: