Winterton Quilters are having a Craft Sale in November. These are the mini quilts I made on my quilt Retreat in Hampshire. Patterns by Nancy Halvorsen which I have had for many years. They are fused appliques and were fairly mindless sewing for the days after my accident with Helen when I was feeling rather flat.
﻿ ﻿ There are Signs of Autumn in the garden: 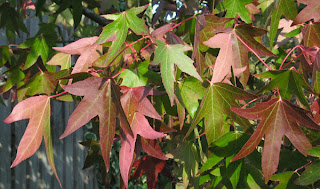 I saw this lovely quilt Enid had made for her Grandson at quilt group... she found inspiration for the designs in a children's magic painting book! 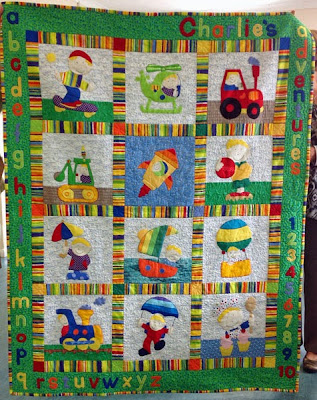 
Posted by Heather Hasthorpe at 03:40 No comments:

I just found this, and thought what a great idea! Jenny has designed and made a chatelaine to hold her sewing essentials, take a look.

I have been sewing over the last few days and will be posting some pictures soon.
Posted by Heather Hasthorpe at 10:35 No comments:

Applique Blocks by my friend Debbie (I can now add pictures but not text!) 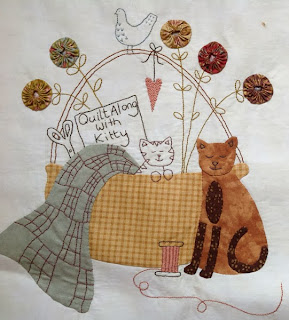 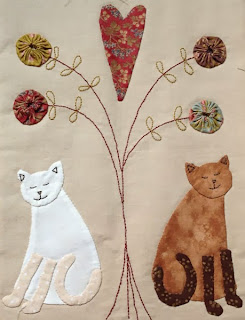 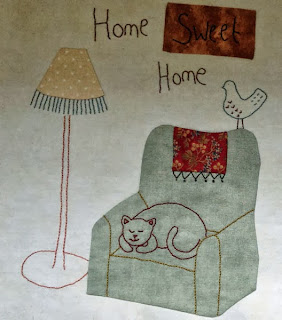 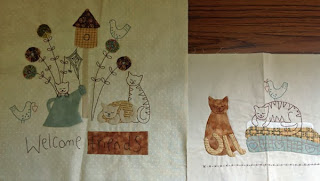 Out and about again..


For some reason blogger on the laptop will not let me have access to this page so I can't upload any photos.
If you have seen the photos of the accident Helen and I were in on Saturday,  check her blog link doesnotequal on right otherwise, I can report that I'm fine, I escaped without a scratch, and Helen is recovering from relatively minor injury.
Tomorrow I am off to quilt retreat in the Candover Valley near Winchester. I may not manage to post from there.

Posted by Heather Hasthorpe at 14:53 2 comments:

I called in to the textile exhibition at Hingham in Norfolk. It's a long way from my home but I was returning from grandmothering so that made it just a detour. There was interesting work, and some super paintings but I spent most of my time looking round the enormous old church. Abe Lincoln's predecessors came from there and there were lots of Amercan links, some excellent paper ships made by children and very nice finely stitched kneelers with a huge range of subjects. The stained glass was lovely and cast interesting colours on the woodwork.

Last weekend I visited the World Textile Day at Mundford. Again a long way to drive but some beautiful lengths of cloth were on display and the methods of construction explained in photos and lectures. I bought some interesting weaves and indigo fabric from the African Fabric Shop and just managed not to get another of ther fab baskets... I have three already!

I have been working on a piece for the contemporary group. It's based on "All in a Days Work" and I aim to reference the way women use textiles to keep their family warm. I have some pieces of old blanket, including mended bits, one with an eyelet where it was used as a door curtain in wartime... There are some old buttons, one a uniform fly button from grandma's button box!
﻿﻿﻿

Posted by Heather Hasthorpe at 11:16 No comments:

I had a nice comment from Barbara Cheeseman on the pictures I put up last:
"I do like these pics - the faded, reused look and the interesting shapes. It has the feel of being worn by sun, wind and salt, but being strong enough to survive! Barbara C."
And that's it in a nutshell, why I was so attracted to the garden. It's designed by a scotsman, and was supposed to go into the Gardens Open for Charity book for the first time this year, but somehow got left out. He had a good write-up in the local paper, and seemed bemused by the large number of visitors!
I was very taken with the simple design of the insect home on the back of a fence covered with vines, again in an old wooden crate with tins fixed inside and filled with chopped bamboo. There was another with the gaps filled in with fir-cones.

Posted by Heather Hasthorpe at 08:50 No comments:

Sunday, and we went to visit this interesting coastal garden at Bacton. The owner is a great beachcomber and has collected lots of rusted iron and bleached wood. There are eye-catching textures everywhere, 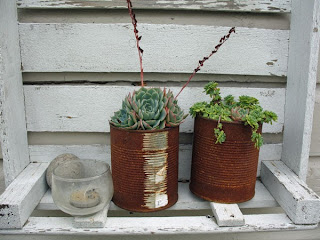 but my favourites were the sempervivums and succulents planted in rusty tins and displayed in old painted wooden boxes hung on the side of the studio like shelving.
Posted by Heather Hasthorpe at 06:55 1 comment: